The TaCTuS Ensemble offers concerts and multidisciplinary shows whose primary energy is music.

Exploring without limits the link between sound, body and space, the five musicians have a rare complicity with other forms of artistic expression.

Collective born in 2011 at the instigation of 5 percussionists (Raphaël AGGERY, Ying-Yu CHANG, Paul CHANGARNIER, Quentin DUBOIS and Pierre OLYMPIEFF), the “Ensemble TaCTuS” offers multidisciplinary shows whose first energy is music.
The many and almost endless possibilities offered by percussion, always at the heart of its work, allow the “Ensemble TaCTuS” to explore permanently the link between the sound, the body and the space, revealing thereby a rare complicity with others artistic expression forms.

Initiated by the choreographers Yuval PICK (No play hero – 2012) and Maud LE PLADEC (Demography – 2013), the artistic collaboration continues alongside the comedian Jacques BONNAFFÉ (Dédale(s) – 2016) through a musical and literary show inspired by Les villes invisibles by Italo CALVINO. In 2014, the “Ensemble TaCTuS” produced it first show, Visages, by Quentin DUBOIS, musical UFO halfway between the concert, theater and choreography. In 2016, spring a surprise by inviting Marion CLUZEL and adapted by a sensible, musical and picturesque interpretation, Jack London’s famous novel, The Call of the wild. Following its desire to mix its practices and collaborations, the “Ensemble TaCTuS” invites itself on the circus scene and is currently preparing its future show (Encore la vie – 2019) with the “Collectif Petit Travers”.
Because they are foremost musicians, the members of the “Ensemble TaCTuS” regularly perform in concert. They are fond of the contemporary repertory (David LANG, Steve REICH, Julia WOLFE, Eunho CHANG, Francesco FILIDEI…) as well as the more classical repertories such as the Goldberg Variations by J.S BACH, recorded alongside the soloist Jean GEOFFROY by an arrangement made by Raphaël AGGERY (CD released in 2015 – Skarbo).

Around its shows and concerts, the “Ensemble TaCTuS” is involved in different transmission actions beside various publics. Musical theater, sound effects, music and drawing…, they are various possibilities to accompany and raise awareness among the audience.

« Ensemble TaCTuS » is supported by the DRAC (regional direction of cultural businesses) from Auvergne-Rhône-Alpes, the region of Auvergne-Rhône-Alpes, and obtained the “Scene Sacem Young Audience” label for its show The Call of the Wild. Its shows regularly receive support from SPEDIDAM and ADAMI.

The TaCTuS Ensemble works closely with Resta-Jay to create percussion mallets for their shows. The vibraphone mallets specially designed for the arrangement of the Goldberg Variations provide a clear, sustained and deep sound, thanks to their pronounced weight. 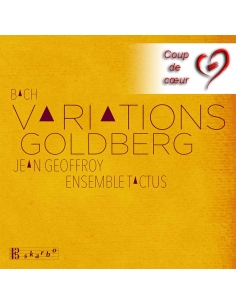